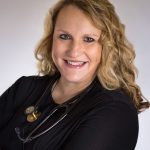 Poppy Daniels is an Obstetrician/Gynecologist in private practice in Ozark, MO. You can follow her on Twitter @drpoppyBHRT.