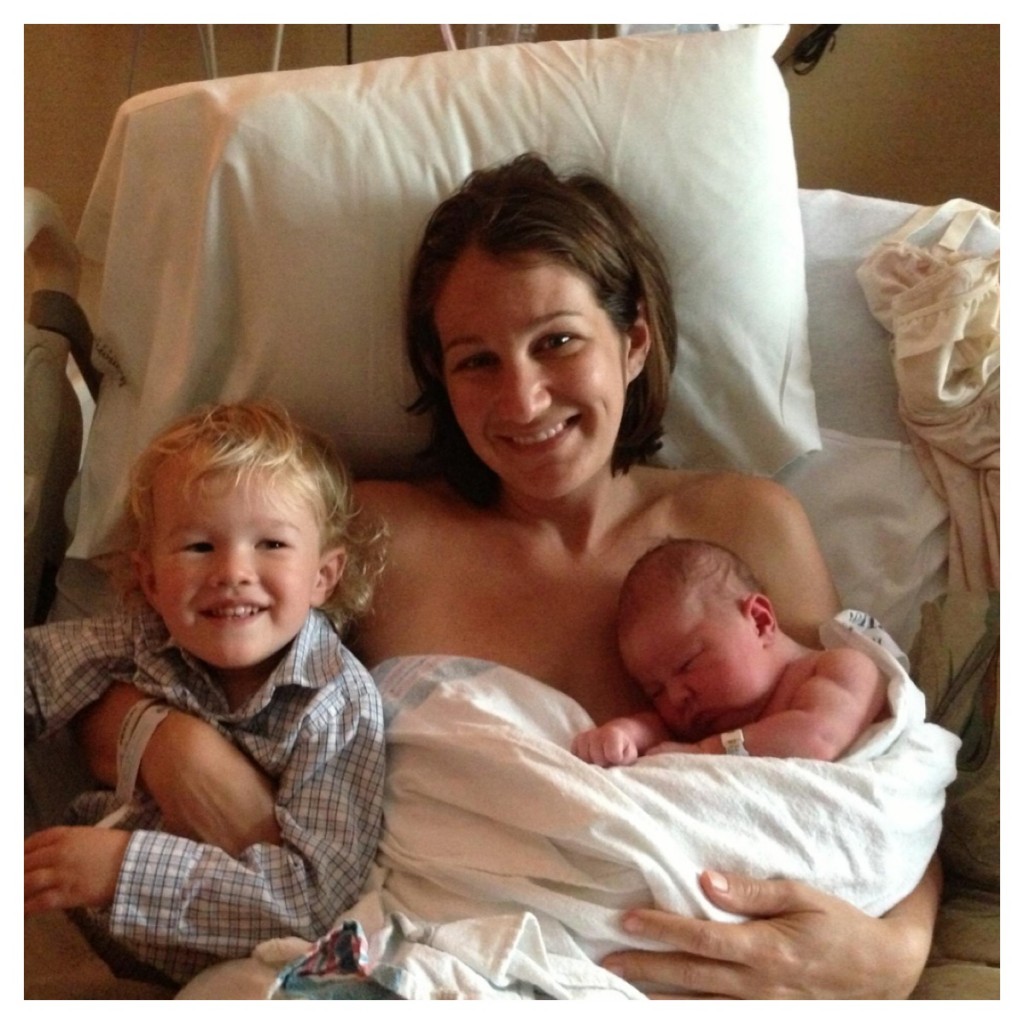 During my last few prenatal visits, my provider had been getting more and more negative about my vba2c [vaginal birth after 2 cesareans]. I would hear comments like, “Oh, you are not dilated at all so you have a crappy cervix and might as well have a section now” (at 38 weeks). And “you are just too old, people over thirty rarely have babies naturally, let’s just do a section” (I was 31).  So at my 39-week appointment when my fluid registered 5.8, I’m sure you can predict the comments… “your baby will die” and “you are a horrible and selfish mom.”They never addressed the fact that I had been hospitalized for severe dehydration from stomach flu days prior. I elected to go receive fluids and tabled the cesarean discussion. The fluids did not bring my fluid levels up and I heard the same comments, despite a perfect score in every other way from the baby. They agreed to give me the weekend and let me be checked in three days. I decided then I was never going to be given a fair shake in the hospital and arranged for a monitrice to help me labor at home when it was time. She gave me suggestions to get my fluid up, which I followed all weekend. I went in on a Monday (at 40 weeks) and my fluid level was 8! The comments I then heard were, “well I still want to section you today, but now I guess I don’t have a reason.”Monday came and went. Tuesday I tried an acupuncturist that had a 100% success rate of induction within 24 hours. Tuesday and Wednesday came and went. I would have contractions by the evening but in my sleep, they would all go away! As I showered Wednesday night I stayed in prayer for guidance. I was frustrated I hadn’t gone into labor and wasn’t sure I would. I was scared of the process and scared of failure. I suddenly began to sing a Casting Crowns song whose lyrics spoke to my soul, “The voice of truth tells me a different story, the voice of truth says do not be afraid, the voice of truth says this is for my glory, out of all the voices calling out to me, I will choose to listen and believe the voice of truth.” I know that was God answering my prayer and giving me reassurance in that moment that all would be well.

On Thursday I took a homeopathic remedy and went to the doctor. My fluid level was at 3. My doctor was in surgery but the nurse practitioner called her and she said I was to “rush” to the hospital. I knew if I went over there I would never get to leave. I knew if I had to labor there the whole time, I would fail. I proceeded to emotionally meltdown in front of the nurse, telling her all the hurtful things that have been said to that point and asking how I was to trust a doctor that clearly has their own agenda? (A question I know so many of you have felt at one point or another also!) Losing hope I would ever start labor on my own, I begged her to please give me an honest agenda-free evaluation of my baby’s health and safety of waiting.The nurse put me on the non-stress test (NST) and after a good half an hour said that the strip was still reactive, the other markers were good, and I was contracting. Her guess was that I was in early labor (I was only at 1.5-2 cm dilated and 50% effaced). She said if I didn’t have a baby by the next morning I needed to go in for monitoring. Fair enough!I left the office and went to lunch with my husband and toddler. I felt the contractions picking up steam, enough to make me want to go home and sleep… enough to give me hope this might be it, 40 weeks and 3 days in. We all went home and I laid on the couch all afternoon with my son and we watched Thomas on TV. I ate dinner and nursed my toddler to bed.At 8 pm my doula came over and we walked. And walked. It felt amazing. The night air was perfect. Our air conditioner had broken hours before so I was contemplating just laboring in the front yard so I didn’t sweat to death.We came home at 9 pm and I took a second dose of my remedy. With that, the contractions got intense. I told my husband, “if this is false labor, I quit!” That was the last thing I clearly remember saying (most of my labor I remember with dimmed senses, no concept of time, almost looking at my body from the outside). I know I labored on a ball in the living room, in the tub, and on the bed. I threw up. A lot. I had a lot of back pain, thank goodness for my doula and her counter pressure work! I labored and labored and labored. They checked my progress and I was 3 centimeters dilated. All I kept saying was ‘God help me.’ My midwife would say, “He is.” And he was…

Then what seemed like ten minutes later, but was actually hours later they checked me again and I was 5 cm dilated and it was time to go to the hospital. My friend came over to watch the toddler and my neighbor was in the kitchen frantically scrubbing dishes to help, or maybe to drown out my screaming, haha. She would later tell me “women get amnesia hormones after birth to forget the pain… but what do the women that have to listen to the women get to forget the pain?” 😉My labor got intense fast, much more intense than the previous five hours had been. I climbed in the back of our minivan and my husband drove like the wind. We passed a cop going well above the speed limit while running red lights, but I guess they assumed a minivan driving like that at 3 am can only be going one place!When we got to the hospital they had the orderly waiting. Oh, the poor orderly. He kept trying to push me and each contraction I would jump out of the chair. He would beg me to sit down and I would scream at him to let me stand. We finally reached an agreement that if he’d let me out of the chair to get through contractions, I promised I would not have the baby in the hallway. Haha. He was a young kid and I could tell he was terrified.I got into the room around 3:30 am, checked, and I was at 7cm. I was really dehydrated from throwing up all night and needed some fluids. The nurses tried and tried and tried. They finally got an IV in. While most people would beg for an epidural at this point, I begged for some Pepcid. My heartburn this pregnancy was brutal and at that moment my heartburn was slowly killing me far worse than a contraction ever could. I labored on the yoga ball for a while until the doctor came in.The doctor started pressuring me to get internal monitors. I said no way because until that point the only people that had been watching the external ones were my monitrice and doula! I said I didn’t want my water broken and they kept telling me I only had 3cm to go so it wouldn’t matter and that it had most likely already broken anyway. I argued for what seemed like an eternity but was really minutes, that it hadn’t and that I wasn’t having it broken until it was good and ready.Labor was very intense at this point. I remember looking at my husband and either saying or just thinking, “I’m dying, tell our son I love him.” With that, the doctor wanted to check me. I was at 9cm and 100% effaced. I sat up for a contraction, my water broke (told ya!), I threw up and her head hit the table I was sitting on. I screamed, “I have to push her out.” They laid me back and people flew into action. Lights came on. Tables of supplies appeared out of nowhere. We went from 2 nurses and a doctor to a room full of people. I have literally never seen so many things or people appear out of thin air in my life. I had been there just under an hour at that point and I don’t think anyone expected it to go that fast, except my monitrice and doula. I think they knew things were picking up when we left the house!I laid back and we practiced pushing for a few contractions. I had no idea how to push, this was the first time I ever tried to labor! The doctor told me her head was right there and with one good push, she would be out. I was so tired, I wanted to be done and wanted to meet my baby, so I gathered every ounce of energy I could find. I dug deep down into my spirit and fire in my belly and pushed with all I had. Out came her head.  One more push and out came my baby girl. They placed her directly on my chest and I saw her perfect little eyes looking at me. 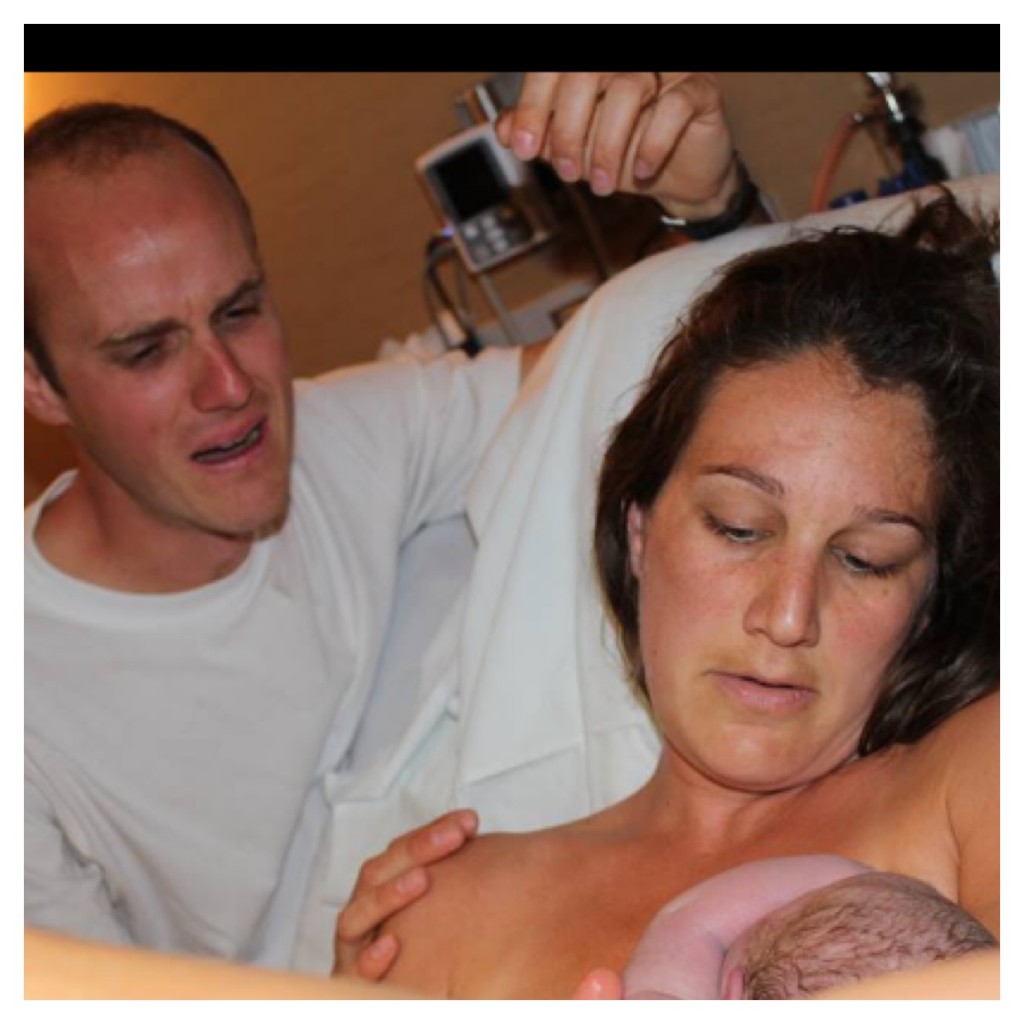 To this day, a year later, when I look at her I still see her newborn eyes looking up at me for the first time. We have a connection that is unbelievably close and I know the natural birth has something to do with that.I am so completely grateful for the opportunity to have had her naturally, to have had a healthy baby, and to have had so many people supporting the VBA2C along the way! I found ICAN through a local Facebook group. The community was a vital part of the process in supplying ideas on talking with providers about controversial things (my VBA2C was very controversial!) and with ideas on how to raise my fluid level at the end. It was also how I was connected to the monitrice I ended up using to labor at home with. Without this group, I would have never known that this was a possibility and I don’t think I would have been successful in having an intervention free birth if I had labored at the hospital the whole time.