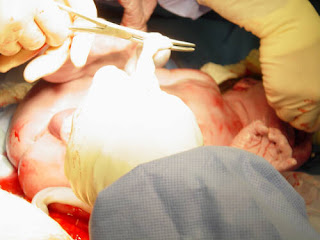 From my cesarean birth photos

At our monthly ICAN of the Twin Cities meeting this past Monday, we watched three breech birth videos: a vaginal breech at home, a vaginal breech in the hospital, and a cesarean for breech. After the videos, we talked about how difficult it is for some of us to watch cesarean videos because it looks so violent, or because it brings back difficult memories.

Then the discussion turned to whether or not any of us have pictures or videos of our own cesarean births and if we ever look at them.

There were several different responses in our group:

How about you? Do you have pictures or videos of your cesarean births? Do you view them? If so, when and with whom? If not, why not?

Posted in Uncategorized | Tagged: Cesarean, Trauma
« Not too posh, but still pushed
Rise of unnecessary cesareans »