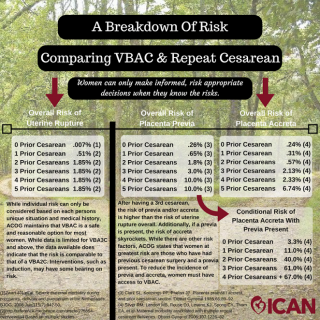 When discussing the possibility of repeat cesarean, placenta previa and accreta are far less likely to be mentioned even though, by the third cesarean, the risk of previa and/or accreta is higher than the overall risk of uterine rupture. Additionally, if previa is present, the chances of accreta sky rocket. Women, especially those open to a large family, may be entirely unaware that they are headed down a path that can lead to a 7% mortality rate.

To reduce the incidence of previa and accreta, cesarean rates must decrease. Women must have access to VBAC. Unfortunately, providers that prioritize avoiding a primary cesarean when possible are rare, and VBAC friendly providers are more rare still. VBAC bans and limited access restrictions are rampant, even though ACOG maintains that VBAC is a safe and reasonable option for most women.

No birth is risk-free, but women should be able to choose which risks they are willing to take on because they – their family, their kids, their future children – are the ones who have to live with the outcomes.