Danielle shares this touching video with us that chronicles her two cesarean births:

My Birth Journeys from Danielle Elwood on Vimeo.

The Daily Beast – The C-section Backlash: Danielle Friedman writes about Joy Szabo, who continues to garner national media attention as she fights her local hospital’s VBAC ban. Friedman interviews ICAN’s President Desirre Andrews and others about why some women experience cesarean as traumatic.

Birth After Cesarean – Birth Trauma is Real: Michele D. asks (and answers) the question, “Why is it taboo to talk about being upset and/or traumatized about your birth experience?”

Natural Papa – Home Birth Dads: 10 Questions with Jerry Shannon: My hubby shares his thoughts on our Home Birth After Cesarean (HBAC) for Derek’s series of interviews with home birth dads.

The Huffington Post – A Woman’s Nation: Reclaim Your Right to Birth Right: Dr. Christine Northrup explains what’s wrong with maternity care in the U.S. but also highlights that women’s increasing power in society means that we can influence change.

Ms. Robertson testified about her experiences with discriminatory insurance practices based on her history of cesarean. View her testimony here. Ms. Robertson was featured in a New York Times article in July 2008 after she was declined insurance due to her previous cesarean. She was informed by the insurance company that her application would be accepted if she agreed to be sterilized.

As of 2007, 31.8% of childbearing women in the United States had a cesarean delivery and the rate continues to increase each year. These increases are due, in part, to the growing number of women who are denied the opportunity to have a vaginal birth after cesarean (VBAC) through similarly discriminatory VBAC bans. “The prospect of rendering a third of women uninsurable is frightening and unconscionable,” said Desirre Andrews, President of ICAN. “Many of these women are being pressured or bullied into first-time and repeat cesareans, and to doubly inflict them by leaving them without health insurance is offensive.” Clearly this type of practice potentially affects a very large number of women now and in the future as the cesarean rate continues to climb and the vaginal birth after cesarean rate continues to decline.

The practice of denying a woman health insurance because of a prior cesarean also indicts the medical community. Many of the cesareans performed today are unnecessary or the by-product of an over-interventive labor management process that is rooted in defensive medicine practices. “It is absolutely wrong to deny coverage to women either because of past cesareans or the risk of future cesareans, but it is also wrong to prop up a system where physicians can overuse surgery that both harms the health of women and babies, and forces insurance companies to take on excessive costs.” said Gretchen Humphries, ICAN’s Advocacy Director.

Cesarean section is associated with double to triple the cost of a normal vaginal birth. Cesarean also imposes the risks of medical complications in the short-term and long-term, which often carry high costs. “Insurance companies, in their actuarial pragmatism, are doing the math and recognizing that moms with a history of cesarean are high-cost beneficiaries and working to weed them out of the pool of people they cover. It’s discriminatory and lawmakers need to address this issue and determine a way to protect mothers, both from the practices of the insurance industry and the non-evidence based care from obstetricians,” said Humphries.

Maternity care is the number one most expensive line-item in the U.S. healthcare bill. From 1996 to 2006, the national cesarean rate rose by 50 percent, setting a new record each year from 2000 onward. The proportion of medically induced labors rose by 135 percent from 1990 to 2005, with strong suggestions that these official induction rates identify only roughly 50 percent of actual inductions. The burden on the health care system is staggering for maternity care as it is today. In 2005, the combined hospital charges for birthing women and newborns totaled $79,277,733,843 and exceeded charges for any other condition. Private insurers paid for 51 percent and Medicaid paid for 42 percent of these stays. “Pregnancy and delivery” was the most expensive condition, followed by “newborn infants” for both payers. Six of the ten most common procedures billed to Medicaid and to private insurers in 2005 were maternity related. Cesarean section was the most common operating room procedure for Medicaid, private payers and all payers combined.

As policymakers focus on healthcare reform and finding ways to improve outcomes while lowering costs, ICAN calls on policymakers to address the needs of pregnant women and make low-cost, optimal-outcome birth easier to access.

· Women are routinely coerced or pressured into expensive care that does nothing to improve outcomes, especially through the increasing practice of banning vaginal birth after cesarean (VBAC)

“The unique beauty of maternity care is that we can simultaneously improve quality and reduce costs,” said Andrews. “But we need to start by treating women fairly and equitably, and intelligently reserve medical technology and interventions for when they are appropriate.”

Mission statement: ICAN is a nonprofit organization whose mission is to improve maternal-child health by preventing unnecessary cesareans through education, providing support for cesarean recovery and promoting vaginal birth after cesarean. There are more than 117 ICAN Chapters across North America, Canada , and various international locations which hold educational and support meetings for people interested in cesarean prevention and recovery.

Citation: C. Sakala & M. Corry. Evidence-Based Maternity Care: What It Is and What It Can Achieve. 2008.

Most women who have had more than one cesarean are told that a repeat cesarean is the safest choice for their births. Many are not even offered the option by their doctors or hospitals.

Not so, according to recent research published in the British Journal of Obstetrics & Gynecology (BJOG). A systematic review and meta analysis of the medical research on vaginal birth after two cesareans (VBA2C) found that there is no statistically significant difference in key maternal and infant outcomes between VBA2C and repeat cesarean (RCS).

According to the study’s authors Samina Tahseen and Malcolm Griffiths, “Comparing VBAC-2 versus RCS, the hysterectomy rates were 0.40% versus 0.63% (P = 0.63), transfusion 1.68% versus 1.67% (P = 0.86) and febrile morbidity 6.03% versus 6.39%, respectively (P = 0.27). Maternal morbidity of VBAC-2 was comparable to RCS. Neonatal morbidity data were too limited to draw valid conclusions, however, no significant differences were indicated in VBAC-2, VBAC-1 and RCS groups in NNU admission rates and asphyxial injury/neonatal death rates (Mantel–Haenszel).”

Such findings should be encouraging to women who want to attempt VBA2C. For more evidence-based information on VBAC after multiple cesareans, click here. 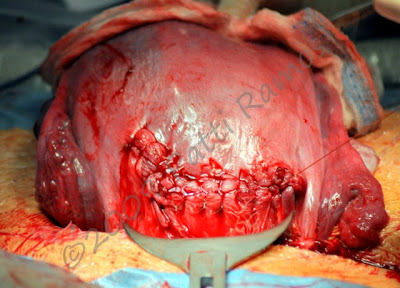 Birth doula and photographer Patti Ramos sent us a link to her photo (above) of the "wounded womb." Thank you, Patti!

For a complete description of what happens during a cesarean, read ICAN’s white paper,"Cesarean – What Happens During Surgery?"