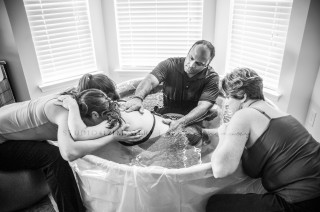 The Midwives Alliance of North America (MANA) recently published data from a large and well-tracked series of planned home births, the result of a home birth registry program that was initiated in 2004 (1).  The data set included nearly 17,000 planned home births attended by a mix of midwives including CPMs (79%), CNMs (15%), and other unlicensed midwives.  Within this cohort were 1054 women with a history of cesarean section who were planning a vaginal birth after cesarean – VBAC – at home. (This is also referred to within the birth community as “HBAC” – home birth after cesarean).   Within this subgroup, 87% had successful vaginal births, with 94% of those births occurring at home and the remaining 6% occurring after a transfer to a local hospital.  This success rate is substantially higher than the 60-80% success rate reported across other large hospital-based cohorts (2) and likely reflects the high level of commitment to and support of natural birth, both from the mothers and their care providers.

The primary risk for women undergoing a trial of labor after a cesarean (TOLAC) compared to women with no history of a cesarean is uterine rupture, which can result in morbidity and mortality to mother and baby.  The American College of Obstetrics and Gynecologists estimates the overall risk of uterine rupture in women with a single low transverse cesarean scar to be approximately 0.7% (3) based on large hospital-based studies. For this reason, ACOG recommends that operating facilities be “immediately available” during TOLAC, a policy that has limited access to VBAC within smaller hospitals, and prevents many women with a history of a cesarean from choosing an out of hospital birth.  In the cohort reported by MANA, the intrapartum fetal death rate was significantly higher for women with prior cesarean compared to those without a history of cesarean (2.85/1000 versus 0.66/1000). For comparison, neonatal death rates for repeat cesarean and hospital VBAC were 1.03/1000 and 0.84/1000, respectively in one recent large series of low-risk births (4), and others have reported mortality rates of 1.77/1000 for primary cesarean births (5).

We at the International Cesarean Awareness Network (ICAN) find these statistics encouraging and applaud the Midwives Alliance of North America for collecting and presenting this data.  The data show that low-risk women who plan a VBAC at home have a high rate of success and a low rate of complications.  We believe all women have a right to choose their location of birth, and out of hospital birth can be safe for many women with a prior cesarean.  The data presented here give mothers important information that can help them understand the risks of HBAC so that they can make informed decisions in partnership with their care providers.  ICAN strongly encourages all women with a prior cesarean to educate themselves about birth options.  We believe that a more well-integrated and established continuity of care system that facilitated home to hospital transfers would improve home birth, and especially HBAC, safety.

The full study can be found here: