You are here: Home / Advocacy / Should a Woman’s Ethnicity Decrease Her Access to Birth Mode Options? 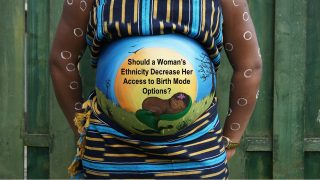 If you have ever wondered what the leadership of your local ICAN chapter does, the following is a good example of our work to promote ICAN’s mission of improving maternal-child health by reducing unnecessary cesareans through education, providing support for cesarean recovery, and advocating for vaginal birth after cesarean (VBAC).

The question our co-leader submitted to ACOG on September 7, 2016, is provided below:

My name is . . . , and I spoke with one of the Medical Librarians this afternoon. This email is in regards to an ICAN of Huntsville chapter member who is . . . pregnant and was told she would not be “allowed” a trial of labor at this practice because of her race and having two prior cesareans. Due to her situation, and that of one of the ICAN co-leaders of our chapter, the practice has created a new policy stating all . . . doctors MUST sign off on a trial of labor after two cesareans, before a mother is “allowed” to have a trial of labor with the assistance of a doctor from that practice. We are writing to get clarification on Practice Bulletin 115, since it was used as the reason for denying this woman access to a TOLA2C. This office has some form of “check-list” that is being used to determine ideal candidates for VBAC and VBA2C. Two of the items on this list are 1. Number of prior cesareans, and 2. Non-white ethnicity.

Were the tables showing decreased success rates for certain subsets meant to reduce access to TOLAC or TOLA2C to those subsets of women?

This paragraph lists factors that negatively impact likelihood of VBAC, but does not list “non-white ethnicity”.

“Most published series of women attempting TOLAC have demonstrated a probability of VBAC of 60–80% (4, 5, 12–14, 22, 23). However, the chance of VBAC for an individual varies based on demographic and obstetric characteristics (see box). For example, women whose first cesarean delivery was performed for an arrest of labor disorder are less likely than those whose first cesarean delivery was for a nonrecurring indication (eg, breech presentation) to succeed in their attempt at VBAC (37–43). Similarly, there is consistent evidence that women who undergo labor induction or augmentation are less likely to have VBAC when compared with those at the same gestational age with spontaneous labor without augmentation (44–47). Other factors that negatively influence the likelihood of VBAC include increasing maternal age, high body mass index, high birth weight, and advanced gestational age at delivery (44, 48–54). A shorter interdelivery interval and the presence of preeclampsia at the time of delivery also have been associated with a reduced chance of achieving VBAC (55, 56). Conversely, women who have had a prior vaginal delivery are more likely than those who have not to succeed in their TOLAC (44, 57).”

But, the box labeled “Selected Clinical Factors Associated With Trial of Labor after Previous Cesarean Delivery Success” DOES list “non-white ethnicity” as a factor leading to a decreased probability of VBAC success. What evidence led you to add “non-white ethnicity” to that list, and why was it not mentioned in the text? Were these meant to be items to counsel women on so they know their risks vs benefits, or were they meant to be exclusionary items used to decline access to TOLAC and TOLA2C?

If a woman seeking a TOLAC or TOLA2C is not an “ideal candidate” based on information in the above paragraph from PB115, should she still receive full counseling on risks and benefits of both VBAC or VBA2C, and also ERC (elective repeat cesarean), and then be allowed to give her informed consent or refusal, regardless of physician recommendation?

The Practice Bulletin described clinical and other characteristics associated with a vaginal birth among those undergoing a trial of labor so that patients and providers can have an informed and shared conversation about plans. The list, in general, and non-white race, specifically, was not intended to be used at a facility level to decide if trials of labor would be supported.  In this regard, the document does not suggest a specific chance for vaginal delivery above or below which a trial of labor should be planned or prevented. While studies have associated non-white race with a decreased chance of vaginal delivery among women undertaking a trial of labor, ACOG does not support using race to exclude any women from the option of a trial of labor.

We continue to monitor VBAC and TOLAC studies and literature. If there are any changes to ACOG guidance, it will be published in the Green Journal. Please reach out anytime you have any questions- happy to move it through our experts.

Have a great day!

American College of Obstetricians and Gynecologists

Thankfully, ACOG was quick to respond with their intended interpretation of Practice Bulletin 115, in order to end any confusion that may have occurred. We are so grateful for ACOG’s willingness to respond to our questions and are hopeful it will help the women in this country have greater access to evidence-based care.

* For privacy reasons, names, personal information have been removed. ACOG has reviewed and approved of this blog post.

Please follow these links for more information from ACOG on VBAC:

You can contact ACOG at Practice@ACOG.org if you have any questions or concerns regarding a trial of labor after cesarean.