You are here: Home / Birth Story / CBAC Guest Post: Pushed to the Limit. Betrayed by my Body. 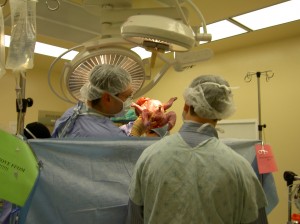 When I was pregnant for the first time, right through most of the pregnancy I had planned on delivering at the hospital with an epidural; that was the plan.  I didn’t need to be a hero.  There was no need to suffer.

At some point, I started leaning toward a homebirth.  I think initially the idea of being in my own home with my own things was my motivation.  Then I had to wrap my head around the idea of a drug-free birth.  That part was a bit more difficult but somewhere along the way I started to trust my body; trust that Mother Nature knew what she was doing and just somehow knew that I could do it.  By the end of my pregnancy, I felt so confident in my body and my baby.

My water broke two weeks before my due date; labour started several hours later.  The midwife arrived, labour progressed.  Everything was as it should be, my body doing its job.  All I wanted to do was sleep.  How about the shower?  Well okay, in the shower for a while but I wanted to sleep.  All I wanted was to sleep.  This is my body coping with labour.  I’m listening to my body, it knows what to do.  I want to sleep.  In between contractions I fell into what felt like the deepest sleep, only to be awakened a few minutes later for a contraction, then back to sleep.

I started feeling the urge to push and I could feel the excitement in the room.  The midwife was letting the second midwife know what was going on, equipment was being brought out, I could hear my midwife quietly give her student instructions; we all thought baby’s arrival was imminent.  The midwife checked me one last time.

In the bathtub I am sleeping between contractions; I feel only slightly aware of what is going on around me, trying not to push (push).  I am dreading that urge, dreading each contraction not because of the pain, because of the urge.  A contraction, don’t push, I’m trying so hard (push).  I’m fighting my body, don’t, don’t, breathe, blow out birthday candles, my body takes over (push…gush).  My husband called the midwife, all of a sudden there was a sense of urgency.  There was blood, more than there should have been.  Hurry, get dressed; get the car; call the hospital tell them we’re on our way.  Don’t push (push).  The blood has stopped but everyone is scared.

At the hospital, my midwife consults with the OB.  There has been no more blood, the baby is fine.  At this point it has been 16 hours of active labour, still three to four centimetres.  I had an epidural, contractions continued; I never progressed further.  Eventually, I was given Pitocin.  The baby didn’t tolerate it.  After 26 hours of active labour, I had a cesarean.

A few months later I read Home Safe Home: A VBAC – My Way in the January/February 2002 issue of Mothering Magazine.  And I knew like I know my name, that I would have a VBAC.

I read and read; books, websites, whatever I could get my hands on; anything to do with natural birth, VBAC and c-section prevention.  The next time was going to be different.

When I found out I was pregnant with my second I found a doula, midwife, naturopath, and chiropractor to support me.  My husband was behind me 100%.  We planned an HBAC and we did everything right.  We did everything we possibly could during the pregnancy to ensure proper positioning and to get my body ready for labour.

Labour started, things progressed.  I was upright, on hands and knees, up and down the stairs sideways, in the birth pool, in the shower, on the birthing stool, standing, swaying; I did it all.  I wanted to sleep so desperately, and I did sleep at times but I was so determined for this labour to be different.  I was fine, baby was fine.

The sun was coming up and I started feeling the urge to push.  I heard someone say we’d see the baby by morning.  The midwife was getting ready.  Labour continued, time passed, the urge to push got stronger.  The midwife checked me.  Four centimetres.  What?  Four centimetres.  But wait, this was supposed to be different.  I did everything right.  Don’t push.  What?  Don’t push.  No, no, no, not again.

We finally go to the hospital and I get an epidural.  Maybe if I don’t push, the swelling in my cervix will go down and I will dilate.  Maybe if I just get some sleep.  Then the decelerations started.  Deep decelerations that were not quick to recover.

The OB is paged and comes in.  No introductions, no pleasantries.  “We have to get this baby out.  Now.”  Can we talk about it?  “You talk about it; I’m going to get the OR ready.”  I look around at my team, I can see the devastation on their faces, I can see their pity, I know they are worried about me.  It’s okay.  I’m okay.

I am rushed down the hall on a bed.  I sign the consent lying on my back on the operating table.  The baby is born, a boy. I get a kiss, then he is gone.  I tell, no, I insist that my husband goes with the baby.  They go to the special care nursery as a precaution because the baby seemed to be working hard to breathe.

With my third pregnancy, we’re not sure what to do.  We’ve tried it all.  I am convinced that if I get an epidural early – as soon as I get the premature urge to push – that my cervix won’t swell and I’ll dilate and have a VBA2C.  But then…no hospital in the city of Toronto will agree to let me labour after two cesareans.  What?  It’s my body.  It’s my baby.  Still, nobody will agree.

It was a very stressful pregnancy, I have my midwife and the same team as before but otherwise, nobody will support my VBA2C.  I cried a lot.  I tried to figure out my best chances of a successful vaginal birth.  I finally changed OBs in my third trimester; she and my midwife shared care.  The OB doesn’t agree with me but is nice, calm and respectful and most importantly she knows she can’t make me do anything.  My OB discussed my case with the other 17 OBs at the hospital.  She and one other OB think I should be able to decide if I labour or not.  Nice.

I went into labour on Christmas Eve.  I had a shower and cried and cried.  Thank you, baby for starting labour before my scheduled c-section on my due date (which I didn’t plan on showing up for, agreeing to book it was strategic.  It made it easier for my OB to answer to her superiors if I had a c-section booked even though we both knew that I’d go into labour before, just like my other pregnancies).  This is the day my baby was meant to be born.

Labour was much the same.  It wasn’t long before I started to feel that urge.  “Do you feel pushy?” my husband asks.  “No!” I answer a little too quickly and a little too loudly.  They knew.  We all knew.  My body was betraying me again.

We went to the hospital; we called on the way to tell them we were coming.  It was Christmas Eve.  I would learn later that I was the only woman in the hospital in labour on Christmas Eve.  We arrive at the hospital and I am offered a wheelchair.  No, I want to walk.  We get off the elevators and step on to the L & D floor.  A nurse walking down the hall took one look at me and said, “We’re going to section you right away.”  Umm, no you’re not.

Another nurse met us down the hall and led me into triage.  I said to her, “I know you all think I’m here for a c-section but I’m not.”  She says, “Okay, I’ll get the OB and then you won’t have to explain things twice.”  I’m shocked.  The OB is not my OB, his name is Dr. B.  I explain my wishes: I know the risks (I cite VBAC and VBA2C statistics off the top of my head) I have the premature urge to push, I want an epidural and I want to labour for a few hours to see if there is any progress.  Dr. B listens patiently.  He calmly explains the risks (and also explains that even though I know the risks he still has to explain them to me).  He says “okay”.  Pause.  What?  We’re all shocked.  I realize that Dr. B is the only other OB that thinks I should be able to decide whether or not I should be ‘allowed’ to labour and I realize that someone is watching over me that day.

The hospital respected my wishes and the OB discussed everything with me, my husband and my midwife.  After labouring for several hours and seeing no progress I was satisfied.  I really had tried everything and all my “what ifs” were answered.  The OB agreed to all my wishes before I signed the consent for the c-section.

In the operating room, my husband, my midwife and my doula were with me.  When the baby was born he was lifted up above the curtain.  The room was silent and I got to announce the gender.  I don’t know why this was so important to me, but it was, and it was a moment I will never forget as long as I live.  “It’s a boy,” I said.

My husband did skin-to-skin with the baby in the OR.  The baby tried to latch on to my husband.  There was no eye gel, no formula and we were never separated.  The baby latched on in the recovery room and nursed contently.  I remembered everything the next day.  I felt okay.  I felt at peace.

Permission to repost given by Amanda Taplin on Familynature.ca. She can be found on Twitter, @FamilyNature.