You are here: Home / Education / Why is our VBAC Rate So Dismal? 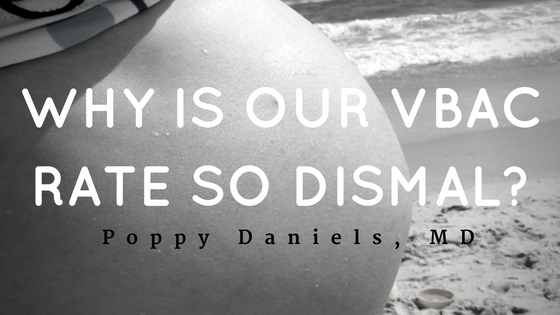 Katie Gaither had her first cesarean in 2004 for breech presentation. She got pregnant again shortly after that birth. She was told she had a high chance of uterine rupture and that she wouldn’t find a provider who would agree to a trial of labor after cesarean (TOLAC).  Just 13 months later, she had her second cesarean. Fast forward 10 years, and Katie was pregnant again and she found she was still having trouble finding a doctor who would support her desire for vaginal birth after cesarean (VBAC).

In June of this year, the CDC published the National Vital Statistics Report entitled, “Births: Preliminary Data for 2015.” The report indicated a national cesarean delivery (CD) rate of 32.0% in 2015, a drop from a peak of 32.9% in 2009 and the lowest level since 2007. While this slight decline is considered good news by those who are actively addressing the US Cesarean “epidemic,” the fact remains that over 1 in 3 women will give birth surgically. The majority of women who have a CD and have more children afterward will go on to have a repeat CD. A 2008 report by the CDC reported that 92% of women have a repeat cesarean, for a VBAC rate of a dismal 8%. There are many provider, hospital and regional variations in cesarean and VBAC rates, with Mississippi having a cesarean rate of 37.7% and Alabama having a VBAC rate of just 4%.

Many professional organizations have expressed concern about the escalating cesarean rate, including the Society for Maternal-Fetal Medicine and the American Congress of Obstetricians and Gynecologists (ACOG), who released a joint statement in 2014 acknowledging that while CD can be life-saving, “the rapid increase in cesarean birth rates from 1996 to 2011 without clear evidence of concomitant decreases in maternal or neonatal morbidity or mortality raises significant concern that cesarean delivery is overused.” A patient approach to normal labor, especially in nulliparous women, and avoiding elective induction were recommendations of ways to prevent a primary CD. Margaret Willbanks’ doctor induced her first labor just two days after her due date. Her membranes were ruptured when she was 1 cm dilated and Pitocin was started. Her labor never progressed and she was taken for a cesarean. Afterward, she was left wondering why her body failed her and the suspicion that her provider’s upcoming vacation caused her to be rushed along when her body wasn’t ready. With Margaret’s next pregnancy she noticed that every time she brought up VBAC, she was told it was unlikely that she would have one.  Knowing through her own research that she had no specific risk factors, she switched providers twice before finding someone willing to support her desire to give birth vaginally.  Margaret regretted that she didn’t know anything about her doctor’s personal cesarean rate during her prenatal care.

While preventing the first cesarean delivery is of great importance, many public health experts, providers and patient advocates agree that supporting VBAC in women who are suitable candidates is an equally important goal. In 2010, the NIH convened a Development Conference on the subject of VBAC and generated a Consensus Statement that reviewed much of the data regarding elective repeat cesarean delivery (ERCD) and TOLAC. The Consensus Statement recommended that women undergo extensive counseling regarding the risks and benefits of ERCD & TOLAC, suggested that trial of labor was a reasonable option for many pregnant women with a history of a prior CD, and expressed concern about barriers by clinicians and facilities that such women face.  The NIH Conference was followed on its heels by a revised ACOG Practice Bulletin on VBAC which stated that most women with a prior low transverse CD “are candidates for and should be counseled about VBAC and offered TOLAC.” The Bulletin went on to say that women with two prior CDs could also be counseled regarding VBAC in light of their individual risk factors. ACOG also acknowledged that its own prior guidelines had in many cases made TOLAC prohibitive for many facilities and patients and reiterated that women could not be forced to have a CD against their will even if a provider or facility were unwilling to offer VBAC (a VBAC “ban”).

Unfortunately, this evidence-based support for VBAC has not translated into clinical practice in an appreciable way.  Many women are still being given one-sided counseling with an emphasis on the risk of uterine rupture with a TOLAC and little, if any, acknowledgment of the risks of surgical delivery, especially in women who want a larger family.  According to a recent journal article in the Lancet, the US maternal mortality rate (MMR) has risen from around 8 of 100,000 live births in 1987 to 18.5 in 2013. While older or sicker women becoming pregnant is often the reason given for this change, the risks of surgical delivery such as venous thromboembolism and increased risk for obstetric hemorrhage have contributed to the rising MMR. Abnormal placentation such as placenta previa or accreta in a subsequent pregnancy after prior CD is also on the rise.  Placenta accreta, where the placenta embeds in the uterus in the location of the previous cesarean scar, has risen from 1 in 4000 pregnant women in 1970 to 1 in 533. Placenta accreta is a potentially catastrophic complication that can result in hemorrhage, hysterectomy and even death. Each CD increases the risk of this scary complication, and in the presence of placenta previa (placenta covering the cervix), the risk of accreta can be 40% or higher with three or more cesareans.  Even so, many women undergoing ERCDs are never counseled regarding these risks or asked questions about potential family size in the planning for route of delivery. While the implication given to many women is that VBAC is more risky due to the chance of uterine rupture (less than 1% with spontaneous labor and one prior LTCD), the reality is that each route of delivery has its own risks and benefits. Women would be better served to be given information about the different risks for each clinical situation, in the context of her own individual maternal health and obstetric risk factors.  Jessica Yancy had two prior cesareans: one for breech, and the second was “automatically scheduled” because her doctor implied that VBAC was illegal in Oklahoma, her home at the time. When she became pregnant with her third, her research led her to learn the risks of multiple cesareans and she began looking for a VBAC-supportive provider.

To help women navigate often complicated and conflicting information, Lamaze International published “A Woman’s Guide to VBAC” on their blog, Giving Birth With Confidence, which aimed to provide women with a side-by-side informational comparison guide between VBAC and ERCD. Other websites like www.VBAC.com and www.VBACfacts.com are helpful resources for women who are considering pursuing a trial of labor. Pregnant women are sought-after healthcare consumers and just as they might research buying a car, can find out about their state or hospital’s cesarean rate by visiting www.cesareanrates.com and www.leapfroggroup.org/patients/c-section. Women can also ask about their provider’s own cesarean rate.

The International Cesarean Awareness Network (ICAN) is an educational support group which advocates for informed birth choices for women who have undergone cesareans. In 2011, I was honored to present a lecture at ICAN’s “Gateway to a Better Birth” conference in St. Louis, entitled “The 3 P’s of VBAC, Pregnant Woman, Provider, Proviso: Navigating the Waters.” This talk outlined the importance of evaluating every woman interested in VBAC on a case-by-case basis of risk factor assessment by way of a thorough “VBAC evaluation,” and encouraging women to have the option of pursuing VBAC-friendly providers and facilities including OB hospitalists, midwives, and doulas. Optimizing maternal health before and during pregnancy is essential and well as providing quality prenatal care, support and education with the final goal of reducing unnecessary interventions in labor.

The keynote to the ICAN conference was given by Dr. George Macones, MFM and Chair of the OB/Gyn Dept at Washington University and author of multiple journal articles in the VBAC literature. His keynote was called “Talk with Your Feet” where he encouraged women to pursue the chance to VBAC by changing providers or hospitals if necessary. Five years later, I’m excited to report that due to the implementation of the VBAC evaluation model in conjunction with VBAC-supportive OB hospitalists, Katie, Margaret, and Jessica all went on to have successful VBACs.  Several more women in my practice have had successful VBACs and 5 out of 6 women who attempted VBA2Cs were successful.  Actually, one woman has now had two vaginal births since her two cesareans.  The woman who did not achieve VBAC was at peace with the outcome (uncomplicated cesarean) because she knew she had taken the opportunity to try.  In spite of these successes, the statistics show that we have so much more work to do to reduce the cesarean rate and encourage VBAC in those women who want it. Let’s help providers and hospitals become aware of the evidence-based support for VBAC so that many more women than currently are can explore this important option.

*All names and medical information are shared with the patients’ permission.

Poppy Daniels, MD is an obstetrician-gynecologist in private practice in Ozark, MO. You can follow her @drpoppyBHRT on Twitter. She also had successful VBACs after two cesareans. You can read her birth story here.