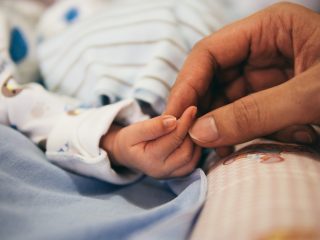 I went in for a routine mid-pregnancy scan at 20 weeks and was sent home after being told everything looked good. The next morning I got a phone call from my OB telling me that it looked like I had complete placenta previa and possibly vasa previa. I was told not to google (I did) and that I was being sent to the major hospital for a more in-depth ultrasound to diagnose.

At my appointment two weeks later, I was given the news that I, for sure, had CPP and that I was facing accreta. I was told that all of my care would now be at the University of Iowa hospital, that I would likely lose a lot of blood, require a hysterectomy and deliver at 32-36 week gestation if I made it without bleeds, and that this diagnosis carried a 7% risk of death. I would also be put on bedrest, pelvic rest and to plan for the possibility of hospital bedrest. It wasn’t the happy ultrasound where everyone is smiling and excited, it was grim. I left that appointment devastated, calling my husband bawling (he was away at job training) and sure that I was going to die.

At 26 weeks, they confirmed percreta. The placenta was through the uterus, in the bladder, cervix and who knows where else and I was sent for an MRI to get clearer images of the monster we were looking at. I was fortunate enough that my pregnancy, despite being terrifying, went smoothly. I made it to 35 weeks as planned, no bleeds, no further complications and even managed to get to a good head space as I prepared for surgery. I went from “I’m going to die. My oldest son (who was almost 6) is going to blame his baby brother for this. My daughter (who was 2) will forget me, and this baby will never know me,” to “I have the best team, the best hospital, early diagnosis. Let’s do this.” 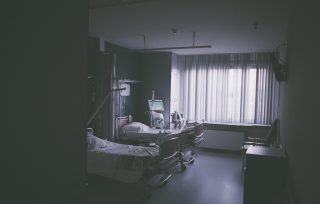 My surgery was in the regular OR with 25-30 nurses/doctors/surgeons. I had my first bleed on the table and so they had to act quickly. I was awake for the cesarean, and my husband cut the cord. I got a quick peek before the baby was whisked away to the NICU. He wasn’t breathing on his own and needed his own support. The usual protocol is to deliver baby, stitch uterus, and deliver with the placenta in situ. The placenta ended up being much more invasive than anticipated – on my bladder, around my ureters, tubes, into my cervix, and actually heading into my vagina. They had to reopen my uterus and start delivering it in pieces because they couldn’t see anything. I quickly began to bleed out and had to be put under general.

I woke up around 2 am – about 12 hours from the start of surgery – intubated in the ICU. I was extubated around 8 am and stayed in the ICU for 27 hours. I learned I had lost my uterus, tubes, cervix and had needed 19 units of blood. I was given pictures of my son and told we wouldn’t meet until I was moving around, so I got up and started walking myself to the bathroom and back. Around 4 pm, I was wheeled to the NICU to meet my son. I was only able to physically hold him for a few minutes. It’s very warm in the NICU and I still had a lot of drugs pushing through my system.

I had a quick recovery and was released from the hospital on day 7. On day 10, I went for staple removal and my wound opened back up.  The open wound required cleaning and packing twice daily; it took three months to close. Alexander, my son, needed 16 days in the NICU. He couldn’t breathe on his own for a few days and lived in an isolette for 14 days because he couldn’t maintain his body temperature, wasn’t gaining weight, had an infection, a heart murmur, and jaundice. Milk production seemed to be a large concern, but Alex is 16 months now and steadily nursing. I call it my percreta gift – I was truly concerned about it and it wasn’t a huge issue.

The entire experience was the worst thing I’ve ever gone through. I lost friends and family because they couldn’t cope. Every day I woke up unsure of what was going to happen. I walked around feeling like a time bomb that could bleed to death at any moment. It was awful. But now, man do I appreciate life. I faced death and won. I now volunteer with the Red Cross, am active in the accreta support group as well as an active member of HfA and advocate as much as I can.