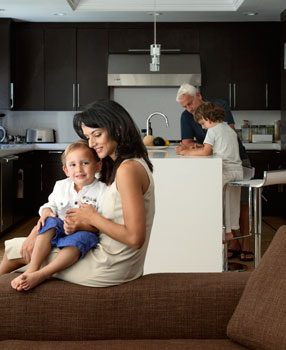 Before her third son was born in 2010, Maya Adam had to face a possibility modern medicine has made almost obsolete: she could bleed to death before or during delivery. A rare defect in her placenta left both Adam and her fetus vulnerable to sudden, fatal hemorrhage.

“We made a video for our two older boys in case they needed it as their final memory,” Adam says, recalling the compilation of family photos and video that she and her husband, Lawrence Seeff, assembled for sons Kiran, then 5, and Misha, then 2, near the end of her pregnancy. The family lives in Menlo Park, Calif., where Seeff invests in startup companies and Adam, a physician by training, teaches child health and nutrition at Stanford. Months earlier, when they decided to have a third child, Adam and Seeff never considered that Kiran and Misha might be left without a mother. “We had plenty of love and resources to give,” Adam says. “You just don’t think that you’re playing roulette with the stability of the older children’s lives.”

Adam’s situation, unusual as it is, reflects a growing problem in obstetric medicine. She had placenta accreta, in which the placenta, the organ that connects the pregnant woman to her fetus, attaches with dangerous tenacity to the uterus. Sometimes – as in Adam’s case – it grows through the uterine wall and invades other organs. Once vanishingly rare, with only one in 30,000 pregnancies affected in the 1950s, placenta accreta now hits around one in 500 pregnancies. Up to 7% of placenta accreta patients die of the disease. Scientists have linked the increase in cases to rising cesarean rates but the exact mechanism of the disease – a conversation gone awry between the placenta and the uterus – remains profoundly mysterious.

Reposted with permission from Stanford.