By Cassandra Forcier (originally shared in the ICAN of Chicago Facebook group); originally posted in 2015

WE DID IT!!!
On November 12th my daughter was born vaginally with no epidural.
Juniper Celeste
9lb 8 oz, 20 3/4 inches
It was the biggest single accomplishment I could have made. I didn’t do it alone. I really couldn’t have. I needed support. I had my husband and my doula by my side for the craziest 12 hours. 6 days later and I have never felt so good. I have never been so happy. I want to help anyone I can to reach their goals too. If anyone needs help, please message me. 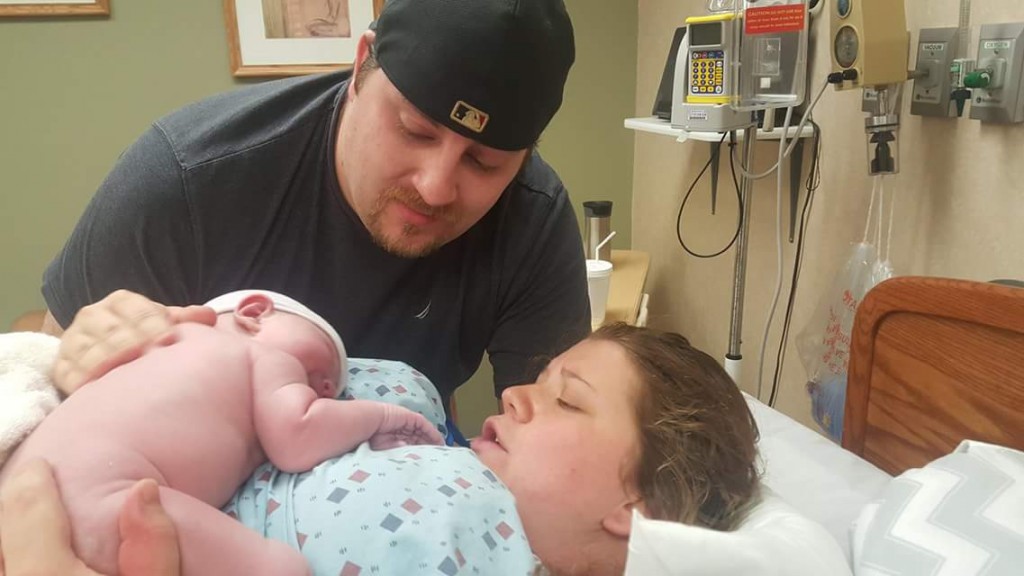 Guessing at approximate times, things are a blur!

9:30 AM: Shawna Mertens, our doula, arrives and helps get me into all kinds of movements and exercises to get labor going. I felt fairly clueless about how to make it go really fast. We were on a clock after all. We all spent the next hours talking, laughing (during contractions was not very fun for me, but my hubby can’t help but crack jokes). It really helped to pass time and keep positive.

1:00 PM: 5 centimeters is enough to have the OB let me continue to labor. More dancing around and squatting and talking. Doula transforms bed into a rocket ship (just kidding, but hospital beds can do so much if you know what you are doing) so that I can get some rest while still in a great position to bring baby down.

6:00 PM: 8 centimeters, OB says we “bought more time,” husband and doula are not too happy with bedside manner. I had no real recollection of that, I got to hear about that after.

6:45 PM: 8.5 centimeters, OB reminds me that if I get an epidural, they won’t have to put me under if there is an emergency. I found the next hour to be unbearable. I couldn’t focus or tell anyone how that scared me. I am terrified of general anesthesia.

7:45 PM: OB is called because I am so ready to push I can’t think about anything else. It took my amazing husband yelling for me to not push before this. It was so uncontrollable.

7:50 PM: OB is trying to give me instructions on how to push, I could not care any less.

I had two very traumatic cesareans with my first two babies. They are 8 and 5 now. My husband and I tried for what felt like the longest two and a half years of our life to have another baby. This time we were sure that no matter what, we would do anything we could to not repeat a cesarean. It’s funny because when we first talked about it, it didn’t cross my mind too much that a cesarean could even happen. I wanted to have a VBAC and nothing could stop me. My cesareans had gone “well,” no crazy complications, and my other two pregnancies were perfectly normal. The only reason I had my first cesarean was because of doctors’ and nurses’ agendas and my lack of knowledge at the time. This time would be different though. My husband and I were armed to the teeth with info, statistics, and a fierce need to succeed.

“HIGHLIGHTS” OF MY PREGNANCY OB APPOINTMENTS:

It wasn’t until about our 20-week appointment that our OB would really talk to us about VBA2C. We originally asked him if he would be okay with a VBA2C. Immediately he said no, too dangerous. We left that appointment pretty upset and concerned. My next appointment, I decided to tell him that I wanted a VBAC, so what do I need to do to prepare now to make sure that happens. I told him about the statistics and risks and why it was so important to us. I asked him if there were any extra risks because of my previous c-sections and asked if we could pull charts to prove that they went well. I reminded him that each cesarean poses even more health risks.

Suddenly it seemed like less of a big deal to him. He said he would check with his group at Illinois Masonic. At our next appointment, he gave us decent news. There are 9 OBs total, 3 opposed, 3 said yes, and 3 said if we come in near transition. We felt okay with this.

Later, we started getting rules about our VBAC. He wanted an epidural in place in case I need a cesarean, we needed constant fetal monitoring (good thing they have wireless), if our baby got “too big” we would need to have her sooner via cesarean, etc. Everything was okay until 38 weeks though. That’s when things got really scary for us.

I got excited first, after a week of pre-labor I was 1 centimeter dilated—glad something happened. Our OB told us that if we wanted to “pull the plug at any point and just schedule that cesarean,” we could. I pretty much lost it. I was in shock. I realized that he was against us and this was not going to happen. I got so scared. We told him absolutely not, we weren’t doing it. He said, “well, we will try stripping the membranes next week, and see what happens.”

That is when I got in touch with a doula. I realized that we needed extra help if we were going to get this to happen. Damn, did that make all the difference, for so many reasons. 39 weeks, the OB says he will give us until 40 weeks because our baby was already at least 8 pounds at the last ultrasound. He stripped the membranes and I was 3-4 centimeters. Nothing happened. I started to really lose it.

Supportive hubby and doula helped me to keep my head on straight. 38 weeks on, we were walking miles, eating spicy foods, pineapple, sex, literally everything you could try to start labor. EVERYTHING. Our 40-week appointment came around and I felt like I was headed to the chopping block. After a good talk with our OB, telling him again why having a VBAC was so important to us, he gave us a choice. To have the cesarean or have my water broken in the morning the next day. Obviously we opted to have my water broken.

1. Make sure your OB/midwife knows that you know what you are talking about. Don’t let them brush things off, they may not be totally opposed, it might be more about them trying to take the “easy” way out.

2. Know your stuff. This might seem redundant, but it’s really important to keep you confident that what you are saying is the best outcome for you. Your OB might not even know all the facts.

3. Get a doula or at the very least, an extra birth partner. I really think our doula saved us in the end for multiple reasons. My husband needed her so that he could do his best for me. She also knew some crazy tricks that helped us get labor to really get going.

4. Try to stay positive. Even when it is hard, you need to get yourself in the right state of mind to get things working. I really had my ups and downs, but when we went to the delivery room, I left my fears at the door. If you can’t forget, make distractions. Laugh, joke, play games. Whatever to pass the time.

5. Seriously consider no epidural. I think that I needed all of the experience to make it work well. Transition was hard, but it is short and pushing may have been the best part to me. Can’t even explain that one. It only took 7 minutes because I could feel what I was doing. I think it makes a real difference.

This birth story was originally shared in the ICAN of Chicago Facebook group with the following note from Cassandra: “Hi everyone! I just want to start off by thanking each and every one of you in this group. I know I haven’t spoken to everyone, but this group stands for so very much. I have posted a couple of times during my pregnancy, and each time, I got some sort of great response. It helped me keep my chin up and keep trying to stay hopeful. Sorry this post will be really long! Skip to the end if you just want highlights and things I’ve gathered from my whole experience, I just needed to write!”