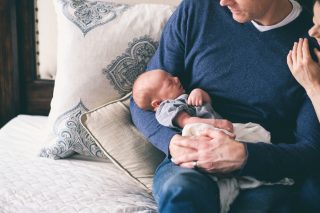 On the day of my 2nd cesarean section (C/S) I was nervous, anxious and just wanting to get it all over with. I had asked my OB about the possibility of a vaginal birth after cesarean (VBAC). She said she was supportive but also told me of her colleague she had just sectioned who (with her expertise) had chosen a repeat cesarean section (RCS) over a VBAC. With no encouragement and little knowledge on my part, I agreed to the RCS. I remember lying on the operating table. My arms strapped down. I had a mini-panic attack and knew right then that I would NOT be going through this again. Ever. So, for the next three years, I had NO desire to ever be pregnant again. Then, baby fever hit and hit hard!

With my first baby, I had decided to go about labor all-natural. No pain medicines. I thought just choosing that was enough. But before I knew it, this snowball effect of standard hospital interventions smothered my plans in IV’s, routine Pitocin to augment labor even though I was in active labor on my own, ephedrine to counter-act my reactions to the Pitocin, artificial rupture of my waters (AROM), epidural to counteract the unnatural Pitocin induced contractions, stalled labor, distressed baby, emergency C/S. The recovery was no fun. I took the prescribed pain meds and have little memory of the first week with my new baby. I healed well and quick but it was not the birth I had envisioned for my first baby.

Fast forward to 2011, we finally, after 4 years of trying to get pregnant, found out in December that baby #3 was on his way! After the initial celebrations settled down, I began to pour myself into all the resources I could get my hands on about natural childbirth and VBAC’s – I was doing my homework this time around! I had my Husband’s full-support as he wanted a better birthing experience as much as I did.

We hit many obstacles! After consultations with several OBs and a midwife, I was told over and over again that I was a great candidate for a VBA2C (vaginal birth after two C/S) but that hospital policy prevented me from being allowed a trial of labor (TOL). At 18 weeks gestation, I finally found a midwife group and get this… a hospital (!) who would allow me to attempt a VBA2C!!! I also found an excellent Doula who had a high VBAC success rate!

At 1:00 pm, at 39 weeks and 1 day, my water broke! An hour later the contractions his hard and fast! We were 1.5 hours from the hospital and thankfully my dear Husband completely ignored me when I assured him we had plenty of time before heading to the hospital! By the time he loaded up the MommyMobile and we got on the road is right when my contractions hit! When we got stopped in traffic I remember telling him there was no way we were going to make it to the hospital! But, God got us there safe and sound and just in time!

After some hassles through triage, I was in my room pretty quickly. Somehow when I called ahead the staff had alerted the midwives about a different patient coming in so for a while they didn’t realize I was their VBA2C patient! This blip allowed me the opportunity to strip down and jump in the tub (that my Doula started filling for me immediately) and avoid the baseline monitoring they wanted on the baby and the IV which was mandatory for VBAC patients!

The water didn’t bring the degree of relief that I had anticipated but the thought of getting out of the tub was unbearable. The pain was more intense than I had anticipated. At some point, they realized I was indeed their VBAC patient and the room was buzzing with people. I tuned them all out. I remember an OB coming in to get my consent to a C/S “just in case”. I just ignored her for as long as I could and continued tuning everyone out. At one point the pain was too much. I remember talking to God and just resting on Him. At this point, I knew people were around me but I had just checked out and no one had any effect on me. I was just resting in God’s strength because I didn’t have enough on my own. (My husband later told me he thought I had fallen asleep!) All of a sudden, my body just took over and started pushing. It hadn’t even dawned on me what was happening until I heard the midwife call out, “Is she pushing?”. That snapped me out of my God time and the energy in the room consumed me again. That darn OB was still there trying to get me to sign that C/S form despite my best intentions to ignore her.

The midwife checked me and I was complete. My body was expelling my baby anyhow so it didn’t really matter to me at that time if I was complete or not! As per hospital policy, I was only allowed to labor in the tub, but not allowed to deliver in the tub, so the midwife began trying to coax me out of the tub. I ignored her, yelled at her, refused but then finally gave in. My Doula and husband helped me out and dressed me in the gown I had packed.

On the way to the bed, that pesky OB handed me that form to sign again… I scribbled something on it but I doubt it resembled a signature at all. Before making it to the bed, a pressure wave hit so hard I just lowered myself down the ground. Squatting was all I could accomplish at that moment. The nurses and midwives were in a rush to get me on that bed and hooked up to the monitors and IV’s. But, after the way my first labor went downhill with the onslaught of interventions, I refused everything! They monitored baby the old fashioned way while I labored beside the bed.

After a bit, my legs felt too weak and my Doula suggested laboring on the bed but on my right side (I was not about to labor on my back)! My body was still pushing through all of this. The nurse kept trying to get me to agree to the IV all the way up until I was delivering the baby which I continually refused. I’m not sure how many pushes but after about 45 minutes of pushing, I succeeded in birthing my baby! My body was not broken. It knew exactly what to do when left to its inherent devices!

Sweet baby Elias Walker was born at 5:27 pm, just 2.5 hours after we made it to the hospital! No pain medicines. No interventions. He was born the old-fashioned way! I had succeeded at my VBA2C!!! After giving the umbilical cord time to quit pulsating on its own, my dear husband got to cut the cord!

I have to add that through the entire labor, even with contractions right on top of each, no break in between, I never once feared a uterine rupture. To me, that was one of my top reasons for hiring a Doula. I wanted someone who was on MY team, had a vested interested in my success who also knew enough to assure me when everything I was experiencing was completely normal but also would alert me if something I was feeling was NOT normal! Janet was my rock and my husband and I are eternally grateful for her role in VBA2C!

I have absolutely no regrets! What I gained from this experience, other than some frustrations over hospital “policy” and “standard care”, is that our bodies know how to birth our babies. Yes, there are exceptions to that rule, but I truly believe that when we set all the inventions that get in our body’s way aside, it is fully capable to do what God granted it the ability to do – bring life into this world!

As a Childbirth Educator In-Training, I am so thankful for the personal experience I will be able to share with families planning the birth of their babies!