As the National Institutes of Health (NIH) Consensus Development Conference on Vaginal Birth After Cesarean (VBAC) gets underway this morning, we bring you our first-ever ICAN Blog Carnival. We have invited bloggers to submit entries on the topic, “Why is VBAC a Vital Option?” and they have answered. Thanks to all the bloggers featured below for your passionate and insightful entries.

Allison’s story on The Unnecessarian is all too familiar to many women – pressured into a cesarean for a “big baby”, assured that VBAC will be supported, only to have the rug pulled out from under you at the last minute and instead “agreeing” to a repeat cesarean (but was there really a choice?). What of the evidence supporting VBAC’s safety? What of the rights of women to refuse unwanted surgery? These are the questions Allison’s story raises and other bloggers have sought to address.

VBAC: What about rights and choice?

Sheridan at Enjoy Birth illustrates the quandry faced by VBACing women with an analogy to choosing whether to travel by boat or by plane. Henci Goer at Science and Sensibility discusses the perils of viewing VBAC from a “preference” perspective as opposed to a right.  Janelle at Birth Sense shares the provider’s perspective, including concerns about malpractice insurance, threat of lawsuits, and time constraints, but also argues that providers must stand up for evidence-based guidelines. Courtroom Mama dissects excuses made by hospitals for not allowing VBACs that demonstrate the paternalism behind VBAC  bans. Simone at the International Childbirth Education Association (ICEA) blog shares two VBAC stories, illustrating that, while VBAC “success” is not a guarantee, it is nevertheless a woman’s choice to try and no one should stand in her way. However, as Rachel at Frum doula and Kayce at Hearts and Hands Services argue, many women do not even know they have the choice to VBAC or are misinformed about the risks of VBAC vs. repeat cesarean. Finally, Gina at the Feminist Breeder sums it all up: access to VBAC is fundamentally a human right.

VBAC: Good for Moms and Babies

So much of the focus around VBAC is about the increased risk of uterine rupture due to the cesarean scar. While this risk is real, several of our bloggers point out that VBAC is also protective, of both mothers and babies. Melissa of Melissa’s Space, a VBAC mother herself, discusses how VBAC actually protects mothers and babies from the risks and consequences of surgery. Similarly, Willow at Willow’s Rest, an OB nurse and VBAC mama, shares her own experience of the hidden costs of cesarean for mothers.

Still further, some of our carnival  bloggers assert that increasing VBAC’s availability can help solve major issues facing maternity care in the U.S. Robin at Birth Activist discusses how increasing VBAC could lower the maternal mortality rate.  Heather and Jessie at ICAN of the Twin Cities blog posit that VBACs are vital to reversing the rising cesarean rate. Kim at Tea and Devons states that supporting VBACs will help ensure that cesareans occur only when truly necessary. Finally, Kristen at Birthing Beautiful Ideas suggests that if the wealth of evidence surrounding the safety of VBAC is not persuasive enough, perhaps providers and hospitals that refuse to support VBAC should face regulatory pressure or incentives to severely limit the number of primary cesareans they perform. 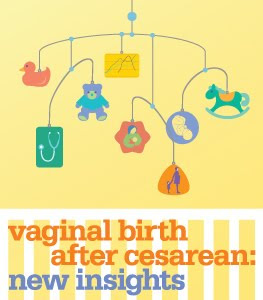 In light of the upcoming NIH VBAC Meetings, the ICAN blog would like you to be heard in our first-ever blog carnival.The NIH Meetings, to be held in Bethesda, MD from March 8-10, will gather “invited experts” to present evidence on the safety and availability of VBAC in the United States. After the meetings, an “an unbiased, independent panel” will prepare an consensus statement on the issue.

There are 20 minutes designated on the conference agenda for “mothers’ stories.” Here at the blog, we’d like to offer a little more air time for you to share your voice on this important issue.

VBAC as a Viable Option

The ICAN Mission, Vision and Statement of Beliefs demonstrate our ongoing commitment to supporting and promoting VBAC as a viable and overall safe option for women birthing after cesarean:

We invite you to write a blog post on your blog and submit it for inclusion in the carnival.* We will post the carnival on March 8th as the NIH Meetings begin. Here are the instructions for participation:

Topic: Why is VBAC a vital option?
Submissions are due March 6th, 2010
Email your text and link to: blog@ican-online.org

*If you you not have your own blog, you can submit your entry to the blog for consideration as a guest post.