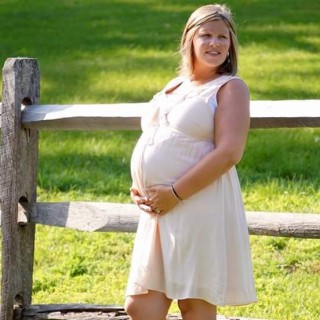 I had my first son in October 2009. He was 10 days late and after being induced for over 24 hours and having failure to progress during labor the doctor said that we could do the cesarean now or we could continue the induction the next day. I was tired and realized another day of induction would be miserable so I elected to have a cesarean at that time. When my son was born he had marks on his head from trying to move down my pelvis. It was clear that I would not have been able to have him naturally.

Fast-forward 18 months April 2011, and my second son was born. At this time I really wanted to VBAC and thought I had a supportive team behind me. As we got closer to my due date, I had a growth scan, and the doctors convinced me that the baby would be too big, that I should just plan for a cesarean. I do believe this was my biggest mistake. The second baby was my opportunity to VBAC. He was much smaller and his head was significantly smaller than my 1st son’s! I remember asking my midwife before I chose to have a cesarean, “I realize trying for a VBAC is dangerous but isn’t having multiple cesareans even more dangerous?” I honestly don’t remember the answer. After my son was delivered, I hemorrhaged. The cause was uterine atony. I ended up with two blood transfusions, and the OB told me the next day that if I didn’t stop bleeding I would need a hysterectomy. Of course I was devastated with this news, but with Methergine my uterus finally contracted and the bleeding subsided. The recovery was hard. It took me a good few weeks to finally feel normal, and my milk never fully came in so I was forced to supplement with formula right away. 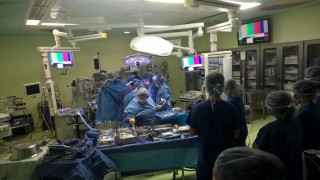 My husband and I were rightfully concerned about getting pregnant again (in addition to two boys 18 months apart) so we decided to hold off on another child for a while. Then in June 2015 I became pregnant again but miscarried in September at 14 weeks. There was no known cause of my miscarriage. The doctor actually told me the embryo probably tried to implant into my scar tissue and was unable to. I did not need a D and C as I was able to pass the fetus naturally. I got pregnant again in December. This time I was super cautious and prepared. I found a doctor that supported VBAC after two cesareans. I started bleeding at six weeks but at the ultrasound we did see a heartbeat. The doctor said the bleeding was either a vanishing twin or sub chorionic hematoma. Whatever it was, the bleeding stopped. Everything was going great. At my 20 week visit, the doctor was very positive: “Everything is great! Your weight, your blood pressure, your urine and the baby!” I felt overjoyed. After my miscarriage, I was so worried but this visit calmed my fears. 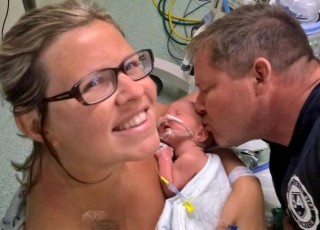 Then two days later at my ultrasound my bubble was popped. Baby looked great; it was ANOTHER boy. My husband had jokingly said “One more time!” But as the exam continued the sonographer asked how many cesareans I had had. Something in her voice told me she saw something. When the doctor came in, he diagnosed me with placenta previa and later placenta accreta. He seemed pretty nonchalant about the diagnosis; he basically just said I’d deliver at 34 to 35 weeks. I was to come back in eight weeks for another scan and he’d keep it monitored. I was shocked to say the very least, but it seemed not very serious if I didn’t need to come back for eight weeks. I quickly researched and of course started to freak out. After finding the Hope for Accreta website and Facebook group, I learned of a placenta specialist in Hackensack, about an hour and a half from my house. While visiting with him, my husband and I decided that he would be the doctor to deliver us. He was calm and reassuring and seemed knowledgeable. He took accreta very seriously. He thought I had increta which would mean keeping me monitored throughout the rest of my pregnancy. Five weeks later, when I was 25 weeks and five days, I started to bleed. We went straight to Hackensack. The bleeding had stopped by the time we got there but to keep me safe the doctor wanted me to stay for a few days. A few days turned into 20. I continue to get ultrasounds and an MRI to diagnose my accreta. The MRI confirmed increta without a little bit of percreta. Since I had no more bleeds I was released from the hospital and instructed to come back at 34 weeks and three days to deliver and have a hysterectomy. Everything went fine for about five weeks. Of course I was always paranoid that I would start bleeding. I questioned every sensation. 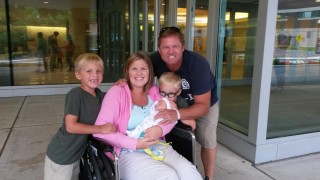 Then five days before I was scheduled to deliver, I started to bleed again. We went straight to the hospital, and I was monitored overnight. The next morning I was told we would deliver that day. The bleeding was subsiding but not stopping, and my uterine irritability led the doctor to this decision. I was scared beyond belief. I cried and worried as everyone around me prepared for my delivery. I was wheeled into the OR at 12:30 pm. It was crazy; there with 20-30 people in the room. Anesthesiologist got me ready with an epidural and a spinal. My husband was let into the room. Surgery started. It felt like forever but it really was only 1:10 pm when I finally heard my baby cry. It was the best feeling ever! After all that worry and anxiety, I knew he was okay. My husband left with the baby, and I was put under general anesthesia. I woke up at 5:45 pm in recovery. I was wheeled down to the NICU to see my baby briefly, but I was pretty out of it from the medication and could only stay a few minutes. The recovery the next day was pretty brutal. By the second day, I was starting to feel little bit better; third day even better, and then so on and so on. Since my son was born at 33 weeks and three days, he needed help eating. His stay in the NICU ended up being 18 days. We are home now and adjusting to life with a newborn.

If I could tell the world anything it would be: Do your research! As long as you’re willing to advocate for yourself, you can do it. Having a baby six weeks early and a hysterectomy at age 33 is not ideal. If I could have avoided it, I would have. We probably would’ve been done at three anyway but having the option to have more children taken away is heartbreaking. I urge anyone wanting to VBAC to advocate for themselves to do so.