Originally published in 2012; link to Amazon Smile that donates a portion of proceeds to ICAN 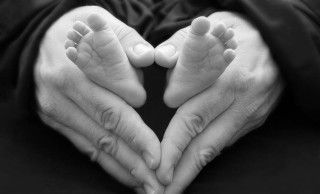 For those who don’t know where it all began, I’ll start with my first pregnancy. August 2008 – I got pregnant with my DD and worked with the Midwife Center to attempt a natural delivery. The entire pregnancy was full of complications, which I won’t go into,  but it came down to me going 41 weeks when they eventually diagnosed me as having preeclampsia and offered a c-section or induced labor. No labor signs had come up to that point so I elected the routine section given my daughter didn’t seem ready to come out anyway. Recovery was very hard, but I got by.

Three months postpartum, I discovered that I was pregnant again and, needless to say, shocked, but learned about VBACs and found a practice that supported my desire to attempt one. This pregnancy went fine except for the fact that it was full of stress having to move, take care of my DD, and mentally and physically prepare to have another child within a year. I tried everything to go into labor naturally using the advice of a wonderful doula I was working with but wound up going 42 weeks and a day without any signs of labor. After getting an ultrasound, they found that my amniotic fluids were dropping and urged that I get my son out asap. With much remorse, I consented to have a repeat section given I really had no choice; obviously, I wanted my son to come out alive. While they were performing the operation, they discovered that the lining of my uterus was so thin they could see my son through it (aka dehiscence) and said it was good that I didn’t labor since I would have ruptured. The recovery was very rough and throughout the following year, I had numerous health issues which I attribute to having two surgeries so close together.

Fast forward to August 2011. I got pregnant again. Returned to my former OB/GYN practice only to be told that they were not very supportive of me attempting a VBA2C. I went looking at other practices only to be told repeatedly that they would not allow me to VBA2C since it was too dangerous and I could rupture. Desperate, I contacted the Doulas of Pittsburgh in January seeking advice about alternative options for bringing this baby into the world. Was home birth something I could consider? Maybe. So I asked about working with a lay midwife who could give me tips for having a natural delivery. I got the name of a woman and we spoke at length about my past pregnancies to which she said she thought she could help me. The Doulas also gave me the name of a doctor at Magee who was very pro VBAC and recommended I speak with him to seek his counsel.

I made an appointment with Dr. K and, after having looked at my post-op records, said that he felt I could attempt a VBA2C but only because I was double sutured (they sewed my uterine wall twice to make it extra secure). He said I had a 7 out of 10 chance of having a natural delivery but that the damage that could result if I did rupture would be bad. I decided it was worth the risk and, upon his suggestion, worked with the Midwives at Magee for my prenatal care while simultaneously using the lay midwife for the bulk of my prenatal needs. The lay midwife came to my house and spent many hours talking to me about things that were issues from my past as well as problems in the present. She said I had a lot to work through mentally if I was going to have a natural delivery as that, along with hormonal imbalances, was preventing labor. I also went to seek medical help from a chiropractor who worked on correcting my imbalances which helped me tremendously.

After months of emotional healing, reading an awesome book, and getting alternative health treatments, I really started to believe it could be possible to VBA2C, that is until I had a follow up with Dr. K at my 39-week checkup. He told me that the midwives were divided about my being able to labor and were not all supportive of me going forward with it due to my dehiscence. They didn’t know what would happen under my circumstances since so few women have ever attempted a VBA2C knowing they also had a window in their uterine wall. I was their guinea pig, so to speak, and they were going to watch me very closely as this was a birth that they would be talking about a lot in the future, whichever way it goes.  I couldn’t believe he was telling me this after working with them for months. I felt like they pulled the rug right out from under me. I was so sick of people telling me I was high risk!  Bottom line, he wanted me to know that if something should go wrong that they weren’t to blame.  It was such a blow to my confidence that I felt like I was all alone and fell back into worry. I called my lay midwife and explained all this, only to get an amazing pep talk that filled me once again with the peace of mind knowing that whatever happens will be ok but that there is more chance of success than failure, especially if I believed it.

A few more weeks came and went until it was my due date, May 20th. However there were no signs of labor and again, I started to worry. Was all this preparation for a VBA2C in vain? Would my body fail me again? Would people tell me I told you so? Would I survive a natural delivery? The thoughts that went through my head were hard. It was the toughest time in my pregnancy. Days went by and still nothing but the usual stretching until on May 27th, I got my first contraction! It was the most wonderful feeling in the world and I couldn’t believe my body was actually doing what it was supposed to. Something I was doing was working!

My contractions were steady at 40 seconds long every 8 minutes. Sunday night, the contractions stopped only to start again the next morning at about the same rate. That night they tapered back again but still stayed with me. That morning, the 29th, I had an appointment with the Midwives at Magee for a BPP ultrasound and followup. The ultrasound looked great so the baby was in good shape. The midwife, M, saw me and said that I was 3 centimeters dilated and asked if I wanted her to sweep my membranes to get things moving. She did and shortly after, I started getting stronger contractions though still at about the same rate. My husband and I walked around the hospital, ate a good sized lunch, and then felt like it was time to admit myself to triage since the pain was strong enough for me to not want to leave. My lay midwife was called in (under the title of my doula) and she, my husband, and I waited in the labor room for things to progress. My body was feeling the pain but it was nothing overwhelming. And then about 3 hours of the same pattern of contractions, the nurse-midwife offered to break my sack of water, which I agreed to. Immediately my body went into full transition labor and stayed there for about an hour. It was so painful that I felt like dying, but my lay midwife kept telling me to not give into the fear, to ride the wave, and to stay on top of the pain. It could not conquer me, especially after all I had done to get to this point. It was really a battle between my mind and my body, and I had to not let my mind be controlled by that pain but had to just let the two work together.

Once I felt the urge to push, things really went quickly and within 2 minutes, I went from 7 to 10 centimeters and felt my baby coming. Five minutes after that, her head had descended but she was in distress, so they rushed a team of doctors in to prepare to take me to a section and started giving me oxygen. However, the midwife told me to push hard to get her out since she was so close to coming out. I pushed with everything I had in me and soon enough, my baby was born! Her Apgar was very low so they had to resuscitate her and I started hemorrhaging from a severe vaginal and 4 centimeter long cervical tear. They had to rush me to the OR to start stitching me up but thankfully, it was nothing that would have any permanent damage. They had never seen a tear that bad before and couldn’t figure out why it happened but in the end, I was still happy because I had her naturally. Not the ideal labor but whoever gets that anyway, right?

So that’s my story and I pray it gives some hope to those of you who are struggling to believe a VBAC is possible for you. So many people doubted this could happen and yet, with the right physical and emotional support, along with keeping a positive outlook and praying for God’s help, I got what I wanted. It’s so cool to think that I have blazed the trail for other mothers who want to VBA2C as well as provide new hope for those who have had dehiscence. All things are possible if you believe! I wish all of you the best in your journey towards VBACing.