Birth Activist – Loyally Devoted to Doctor: Jennifer shares some thought-provoking reflections on why women might feel bonded with birth providers who do them wrong.

Spinning Babies Blog – Where Fear is Seen as Competency: Gail Tully on fear of breech and trusting birth.

Birth Sense – Your OB (or midwife) Still Does WHAT? #1: Birth Sense is on a roll with a new series about non-evidence-based techniques used routinely on maternity wards everywhere. Amniotomy, anyone?

Stand and Deliver – Emergency Deliveries: Rixa rounds up and comments on some recent stories of “emergency births”.

Reality Rounds – Empowered Patient or Entitled Patient?: Who knew a news story’s title could mean so much? RR does!

CNN posted a wonderful article today about Joy Szabo’s VBAC, but someone on the editorial staff hit a few unfortunate keystrokes here: 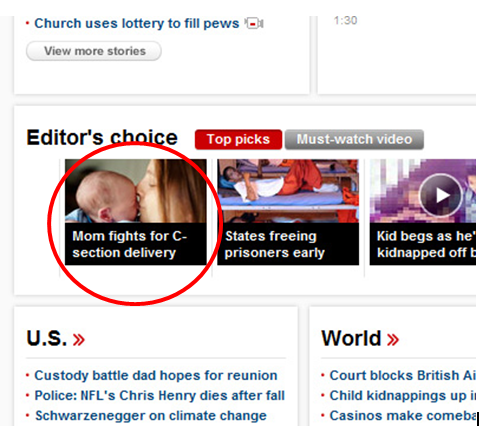 While MSNBC should be commended for it’s recent article on unassisted childbirth, it also joins the ranks of media  misrepresentations of the true risks of cesarean surgery. Here’s a breakdown of the article:

On the growing prevalence of unassisted birth:

The number of home births unattended by either a doctor or a midwife jumped by nearly 10 percent between 2004 and 2006, climbing from 7,607 unassisted births to 8,347 births, according to most recent figures from the National Center for Health Statistics. About 60 percent of the nearly 25,000 home births logged in 2006 were attended by midwives, a figure that experts expect will also rise.

Two women comment on their reasons for choosing unassisted birth:

After giving birth to her first baby in the hospital, Schoenborn, 31, chose to have her next four children at home — by herself. Although her husband was in the house during the births, he didn’t help with the deliveries.

“My hospital births were very managed,” says Schoenborn. “I wanted privacy and to be free of internal exams. I wanted to give birth in an upright position and they want you to lie down. I feel birth is an instinctive process and in the hospital they treat women like they’re broken and birth like an illness.”

For Margulis, the biggest problem in the hospital — and even at home with a midwife — was interference with “normal” labor. When a pregnant woman enters the hospital, Margulis says, she’s signing on for a host of unnecessary interventions, including multiple internal exams, a greatly increased likelihood of receiving the drug oxytocin to speed delivery and also of a Caesarean section.

Margulis’ first baby was born in a hospital and the next two were at home with a midwife. Margulis wasn’t happy with either experience and decided she wanted more control over the process.

After researching the do-it-yourself option, she felt assured the birth process is “safer than taking a shower.”

Margulis cited a recent Canadian study that found giving birth at home with a midwife was about as safe for babies and moms as in a hospital, with the rate of newborn deaths about two per 1,000 for planned home births. The rate of C-sections was a few percentage points higher in hospitals.

The article goes on to discuss the potential risks – unarguably a very important issue. Women considering giving birth in any location with or without a provider should weigh all risks and take responsibility for their choices.

But here is where the report goes astray:

And while women like Margulis and Schoenborn may not like being put on a birthing schedule, experts say there are reasons doctors choose to intervene with oxytocin or a C-section if the labor isn’t progressing fast enough. Among them is the risk of damage to the musculature of the pelvic floor if women strain too long, says Sehdev.

When those muscles are damaged, it weakens the moorings that hold the uterus, the bladder and the bowels in place. The impact of that may not be seen till women hit their 50s and 60s, when the organs can unexpectedly drop down into the vaginal canal.

Really? This is the justification for major abdominal surgery? Hmmm…

While vaginal birth does have consequences for the pelvic floor, it is not a sufficient medical reason for a cesarean. Not only that, but having a cesarean does not ensure protection against pelvic floor damage.

Worse yet, the article also fails to mention the many serious risks associated with cesarean surgery. Here is an excerpt from ICAN’s Cesarean Fact Sheet documenting the risks of cesarean:

A cesarean poses documented medical risks to the mother’s health. These risks include infection, blood loss and hemorrhage, hysterectomy, transfusions, bladder and bowel injury, incisional endometriosis, heart and lung complications, blood clots in the legs, anesthesia complications, and rehospitalization due to surgical complications, rate of establishment and ongoing breastfeeding is reduced, and psychological well-being compromised and increased rate emotional trauma. Potential chronic complications from scar tissue adhesions include pelvic pain, bowel problems, and pain during sexual intercourse. Scar tissue makes subsequent cesareans more difficult to perform, increasing the risk of injury to other organs and the risk of chronic problems from adhesions. One-half of all women who have undergone a cesarean section suffer complications, and the mortality rate is at least two to four times that of women with vaginal births. Approximately 180 women die annually in the United States from elective repeat cesareans alone.

Oh, and the risks to babies:

A cesarean poses documented medical risks to the baby’s health. These risks include respiratory distress syndrome (RDS), iatrogenic prematurity (when surgery is performed because of an error in determining the due date), persistent pulmonary hypertension (PPH), and surgery-related fetal injuries such as lacerations. Preliminary studies also have found cesarean delivery significantly alters the capability of cord blood mononuclear cells (CBMC) to produce cytokines. An elective cesarean section significantly increases the risk to the infant of premature birth and respiratory distress syndrome, both of which are associated with multiple complications, intensive care and burdensome financial cost. Even with mature babies, the absence of labor increases the risk of breathing problems and other complications. Far from doing better, even premature and at risk babies born by cesarean fare worse than those born vaginally.

No wonder more mamas are thinking twice about giving birth in hospitals where rates of intervention and cesarean are so high! Surely more families would consider the risks and benefits of any location for birth, if only the media (and providers) would accurately report them.

Media reports this past week have hyped a recent study claiming that induction of labor may actually reduce the need for cesarean. These findings appear to contradict previous research and generally held opinion.

However, these reports have underplayed and under-reported the substantial caveats offered by the researchers about their findings. Although the authors do report a 22% reduction in cesareans in women who had elective inductions after 41 weeks, they temper their findings with the following:

1) These findings may not translate to many, if any, hospitals in the U.S. because of how obstetricians tend to practice in reality. According to the press release, “Prior research has indicated that doctors often tend to proceed from starting an induction to cesarean fairly quickly.” Thus, in order for these findings to be relevant, doctors must have patience to allow inductions to work. (Which begs the question: Why not just wait for spontaneous labor to occur? See Henci Goer’s “The Thinking Woman’s Guide to a Better Birth,” Ch. 3)

2) Induction of labor, on the whole, remains vastly understudied and further analysis is needed. As one of the lead researchers on the study states, “It’s pretty surprising that something obstetricians do all the time hasn’t been studied all that well.”

With these substantial caveats in mind, it’s far too soon to rush to the conclusion that induction of labor is “safer” than spontaneous labor, even in post-dates pregnancies. The fact remains that women must be aware of the risks associated with any obstetrical intervention and have the freedom to make choices that they believe are best for themselves and their babies, not doctors’ protocols and hospital time clocks.

Cindy Crawford’s birth story began the series on July 8th and it will culminate with an online chat with Crawford herself answering people’s questions from July 27 to 31 on MyBestBirth.com. The other celebrity stories will immediately follow.

Cindy Crawford’s birth story websiodes can be viewed at: http://www.mybestbirth.com/page/cindy-crawford-part-1

The trailer for the webisode series can be viewed at MyBestBirth.com or http://www.youtube.com/mybestbirth.

About Ricki Lake: Actress, producer, filmmaker and author Ricki Lake has reinvented herself at every stage of her 20 year career. Lake has gone from starring in the 80s classic Hairspray to hosting the long-running Ricki Lake talk show for 11 years—while continuing to star in feature films and appear in television projects. Lake has again evolved her career—this time to include birth advocate, documentarian and author with the recent releases of the critically-acclaimed film The Business of Being Born and pregnancy guide, Your Best Birth. Proving that her entertainment influence will always be multi-hyphenated, she presently hosts and executive produces the Vh1 hit series, Charm School with Ricki Lake.

About Abby Epstein: Director and Producer Abby Epstein helmed the acclaimed documentary The Business of Being Born, executive produced by Ricki Lake. The success of the film inspired Abby and Ricki’s recent book, Your Best Birth. Abby made her film directing debut at the 2004 Sundance Film Festival with the documentary feature, Until the Violence Stops. On Broadway, Abby spent four years as the resident director of the musical RENT, overseeing the London premiere and two National Tours. She directed RENT in Mexico City, Barcelona and Madrid. Off Broadway, Abby directed over 100 celebrity actresses in The Vagina Monologues along with the National tour and premieres in Toronto and Mexico City.